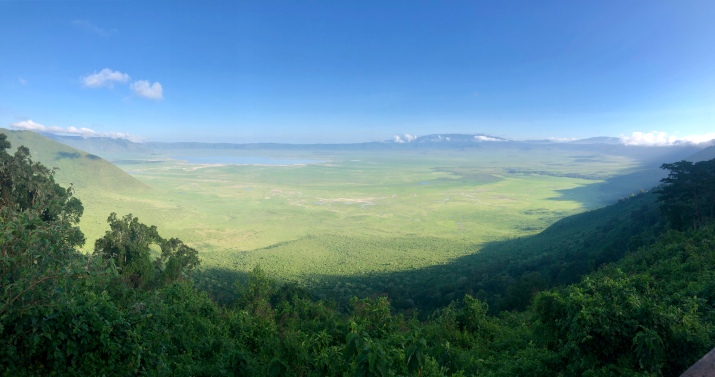 The Ngorongoro Crater isn’t actually a crater in the geological sense. It’s the world’s largest inactive, intact, and unfilled volcanic caldera. The crater formed when a large volcano exploded and collapsed in on itself 3 million years ago. Its floor covers 100 square miles at an elevation of 5,900 feet. Its walls tower 2,000 feet above. It is a conservation area and a World Heritage Site. And, it’s a perfect place for the approximately 25,000 animals who call it home. Large numbers of zebra, wildebeest, cape buffalo, gazelles, and antelope graze the floor where lions and hyena keep a watchful eye. There is no other place like it on earth.

To enter the crater, you must drive up to the rim before beginning your descent to the crater floor. Although I intellectually understood what the crater was, I could never have grasped what I saw from that lookout point without standing there. I think as tour guide Ammy never tires of the reactions of guests as they stumble dumbfounded to the edge of the rim and breathe in the magnificence of the view. It’s unimaginable. And photos cannot do it justice, which is why I wasn’t prepared for the emotion I felt that morning despite having spent hours viewing other’s images of the crater online before our trip.

After we took a gazillion photos that again would not do it justice, we loaded back into the car and turned onto a one-way, 4×4 road to drop the 2,000 feet to the floor. We rocked and rolled from side to side on the way down. Sometimes the downward angle seemed impossible.

Down, down we go

When we finally reached the bottom, it was overwhelming. The views were 360 degrees for 10 miles. Everywhere you turned, there were animals. We saw thousands of zebras communing with thousands of gazelles and antelopes and wildebeests. We saw some lions lazing in the sun. We watched a couple zebras fight, kicking and biting each other. Then we saw an ostrich running from an annoyed wildebeest. 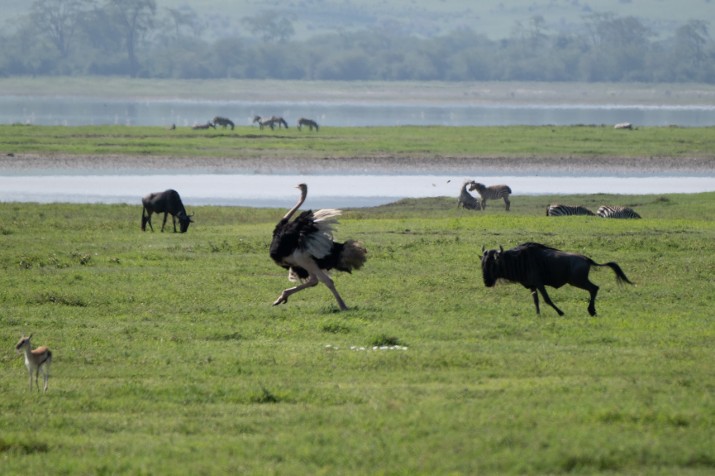 As we all surveyed the surrounding area viewing different wildlife interactions and trying to choose which to focus on, Luke shouted that he saw a honey badger. Say what? Aren’t those nocturnal? This poor fellow seemed to be lost. Ammy surmised he might have gone out hunting and gotten a little too far from his home. He searched for a while before finally settling down near some jackals. While honey badgers may be fierce, apparently they also can be forgetful. Don’t trust this guy to be key master at your keg party.

The one thing you don’t expect on the crater floor is the plethora of Land Cruisers. The crater is a popular place. But because it is also enormous, you don’t feel crowded save for a few areas. The hippo pond is especially popular. Good luck getting a view there without waiting in a line of vehicles.

The other time when we were bogged down by other tourists and their open-roof vehicles was while attempting to view a rhino. Rhinos are a rare sight in the crater because their population, which numbered about 108 in the mid 1960s, is now only about 12-18 individuals. Ammy heard on the radio there was a rhino to view, but took the long way around hoping the traffic would break up before we got there. It did somewhat, and we were able to park and observe it with our binoculars. Steve, with his crazy camera lens, was able to capture this shot from about 150 yards away.

I felt sorry for the rhino. It just wanted to live its life and cross the road, but all the traffic was parked in its way. (Why did the rhino cross the road? Because it was sick of all the damn tourists.) It eventually gave up and retreated far enough back that it could not be seen from any of the established roads. It would cross another time.

At midday, Ammy found us a picnic spot in the Land Cruiser parking lot and we set up lunch. We could not eat outside the 4×4 because the birds were aggressive and not taking no for an answer. We watched them dive bombing other people and decided that indoor dining was the best option.

A friend recently asked me what you do when nature calls on safari. Well, there is no bathroom in the vehicle. So you go into nature when nature calls, which is much easier for the men than the women. Fortunately, after decades of camping and hiking, I have no issues with baring my hind end in the great outdoors. Still, you need some privacy, so the back of the vehicle is where you go. We called this “checking the tire pressure.” Too much coffee this morning? Tell Ammy you need to check the tire pressure, hop out, head to the back of the vehicle, and hope no other Land Cruiser comes pulling up before your pants do.

There are so many critters in the crater that there are endless viewing and photo opportunities. The animals are so close that more often than not you do not need binoculars or a zoom lens to see them or get a photo. I never thought the kids and I would be able to spend 8+ hours a day for a week without wifi or texting, doing nothing but staring at animals, without beginning to miss our life back at home. I was wrong. We weren’t missing our technology at all.

Zebras with a view 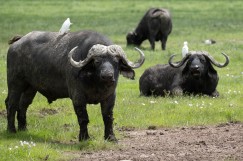 Select any photo above to enlarge it.

If you’re going to make the trip to Tanzania for the purpose of going into the crater, though, be forewarned that in the dryer months views in the crater may be obscured by dust kicked up by Land Cruisers. Ammy told us that sometimes you can’t see from one side to the other because of airborne dust. We lucked out because we needed to travel over the winter holidays. After the short rains of November and December, the grasses were low but green and abundant and, because of the periodic light rains, the roads and landscape were not dried out. Best of both worlds. It made for fantastic scenery in addition to wildlife viewing.

Every night at dinnertime we played a game called High/Low where we each recounted our high moment and low moment of the day. As I recall it, this was one day where we all had to dig for a low. Seriously, what kind of low can you recount while eating a gourmet meal at the Plantation Lodge after a clear, sunny day in the Ngorongoro Crater? Perhaps only that your stops to check the tire pressure subtracted from your time enjoying the wildlife.