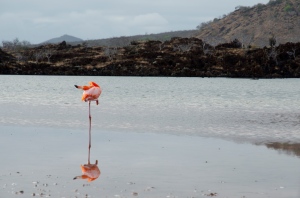 Our day yesterday was spent on Floreana Island. Our Galapagos expedition leader, Paula, told us that Floreana is called the Mystery Island. I’m not surprised. Our excursions there yesterday had me thinking about the now defunct ABC television series, LOST.

We started our day with a very early morning hike to try to see some flamingos. Yes. Flamingos. These are Greater American Flamingos that came here from the Caribbean. There is a small population of about 500 of these birds living in the Galapagos. So, we hiked a bit inland from the ocean to a brackish lake on Floreana, hopeful we would see some pink birds but also doubtful because their population is so small. We were in luck. There were about 15 of them at the lake. How crazy to see an American flamingo out here in the isolated Pacific.

Later in the afternoon, we were doing Zodiac cruises around Post Office Bay (here there is a barrel that was set up in 1793 and you can deposit letters without postage and hopefully someone will stop by, take your letter, and hand deliver it to the recipient at a future date). As we skirted our way around the bay, we saw an eagle ray jump from the water just ahead of us, spied several sea turtles coming up for air, and even saw a penguin. The Galapagos Islands, in addition to flamingos, are also home to a small population of penguins. These are the only penguins that live north of the equator and they can do this because of the Humboldt and Cromwell currents that cool both the ocean and the air here.