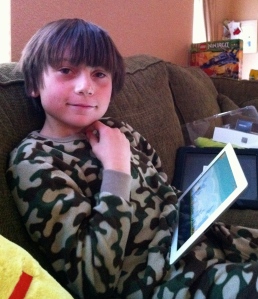 Joe has never been great with surprises. From the days when he was very young, changes in his routine or in what he expected have puzzled and upset him. I remember once when he was three I was driving him to preschool and, preoccupied, I accidentally altered our route. Immediately he recognized my error and started worrying.

“This is the wrong way!” he shouted from the back seat.

“It’s okay, sweetie. We’ll still get there. We’re just going a different route. There are dozens of ways to get to your school. We’ll still end up there.”

“It’s okay,” I reassured him. “I made a mistake. It happens. When you get to school you can tell your teacher it’s your mom’s fault that you’re late.”

Sure enough, that’s exactly what my charming and exceedingly conscientious three year old did. He walked into class a few minutes late and announced to everyone that I had made a mistake and gotten on the highway and that’s why he was late. Eeesh.

Joe had a rough 1st grade year so when his summer birthday rolled around we thought it might be fun to invite all his classmates for a surprise party. I guess we weren’t thinking when we planned the “surprise” part of that equation. Joe arrived at his party and when his friends shouted Happy Birthday, instead of being excited to see them, he ran into the corner of the yard and hid behind some bushes. He was so overwhelmed by the unexpected that he shut down. It took about ten minutes to convince him to rejoin his party guests. I still wonder if he suffers from post-traumatic stress disorder as a result of that surprise.

We’ve spent years trying to convince Joe that change is okay and that, sometimes, it is not only necessary but positive. We routinely put him in situations where we throw the unexpected at him, both positive and negative, and guide him in dealing with it.

When the iPad2 came out, Joe mentioned that he would like one. Ha! Wouldn’t we all? We told him to forget it. We mentioned the Kindle Fire, and that is what he expected to open on Christmas morning. Instead, Santa had a little surprise up his sleeve. Santa had a $250 Visa gift card burning a hole in his pocket, so Santa splurged on the iPad2 after all. I watched Joe with great anticipation as he opened his gift. I’m always waiting for him to freak out, so seeing him happily, calmly surprised like he was on Christmas morning makes me proud.

Experts advise parents of ADHD children to routinize their lives as much as possible. I see the validity in that. Joe does need structure and routine to keep him on track at school and with chores around the house. But, as much as those things help him function more like the rest of us, the truth is that life is messy. Routines get interrupted. Schedules get pushed forward and back without warning. Because it’s difficult for Joe to deal with change, it’s even more important that we give him opportunities to do just that.

Okay. So giving Joe an iPad2 instead of a Kindle Fire wasn’t exactly a stressful surprise or unpleasant change. But, I need justification for purchasing that expensive, electronic gadget that my son really wanted. So, that’s my story, and I’m sticking to it. 😉