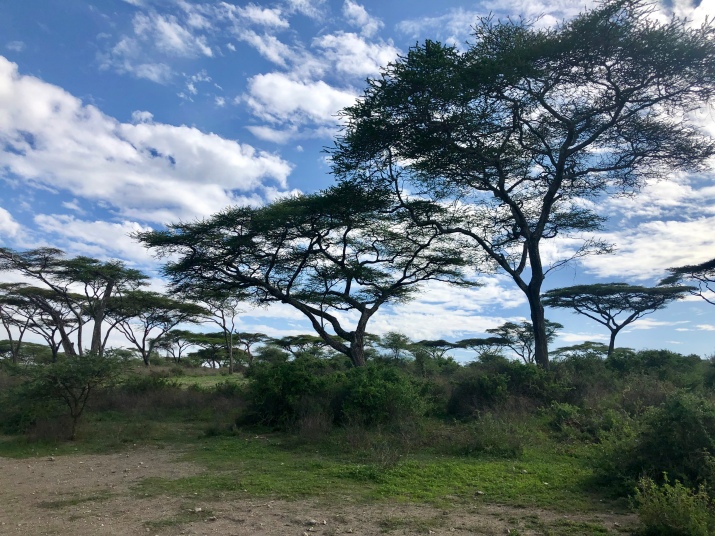 On our last morning in Tanzania, we were greeted with another beautiful day, blue sky dotted with light clouds. We cleared out of our luxury tents and once again met Ammy at the Land Cruiser. It’s safe to say that we were not looking forward to the upcoming twenty-four hours of travel. We were all struggling with the notion that this awe-inspiring trip was over. And we were not ready to say goodbye to Ammy or the creatures we’d become accustomed to seeing over the previous week. I was emotional as we began our drive away from Lake Masek and tried to focus on seeing as much as I could before I could see it no longer.

One of the most commonly sighted animals in the savanna is the impala. We had seen so many of them on our trip in large herds grazing among the bushes and trees, and on this morning they showed up for us again. On our first day on safari, Ammy pointed out that on their hindquarters there is a dark “M” shape. He told us that the impala are the McDonald’s meal for the leopards, literal fast food. We never did see a leopard on our trip, which means we will have to return and try again.

As we drove slowly one last time through the area, we had our eyes peeled for dik-diks. They were the one creature we decided we had to see one last time. They must have realized this because they showed up for us. I think we saw six to eight of them before we hit the small airstrip nearby where we would catch our bush plane headed to Arusha.

The Ndutu air strip is what you imagine it would be…a long stretch of gravel where bush planes come and go every hour. When we packed for Africa, the one guideline we were given was to pack light because the bush planes have a strict weight limit. When we saw the planes, it made sense.

Eventually it was time to say goodbye to Ammy. I struggled to hold the tears back. There are no words to describe what a wonderful guide and person Ammy is. He was so patient with our non-stop questions. His expertise, warmth, and kindness made our trip. One thing that happened repeatedly on the trip is that we would ask a question that we more or less were guessing at an answer for. If we were guessing right, Ammy would respond in his lovely Tanzanian accent, “Exaaaaactly.”  Five months later, Steve and I are still walking around our house now saying that word as if we are Ammy. His big heart and smile made a deep indentation in our hearts.

I think all but two of us were a bit concerned about the bush plane flight. Our oldest had flown on a similar plane in Sri Lanka six months earlier, so he was trying to make us all feel okay about it. I’d never flown on an aircraft this small before, and I’d never taken off from a dirt runway. I captured this photo of my sister-in-law quite by accident, but it pretty much summarizes how we were all feeling as we were preparing to take off.

Of course, airlines around the world operate small flights like this one daily without incident and everything was fine. It was something else, though, being in such a small plane and flying over the expanse of Tanzania. We flew over the crater on our way to Arusha, and it was humbling to see it from the air.

Close up of a carving that was over 15 feet tall 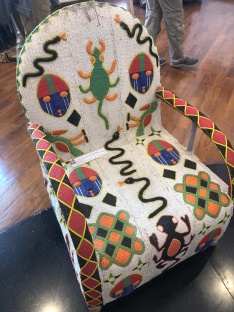 The last we would see of warthogs

Exhausted and overwhelmed after such an incredible trip, we had our lunch on the terrace and spent the rest of the afternoon relaxing before our trip to Kilimanjaro Airport. Joe took a dip in the pool. The rest of us showered after our dusty morning and repacked the best we could. Luke took the opportunity to be in the moment.

When our ride to the airport arrived, we sucked it up and headed for the van with all our belongings and the treasures we’d collected along our journey. While Luke was ready to return home and get back to his own room, Joe, our world traveler, did not want to leave. I had to agree. In the end, we were able to pry Joe from the railing on the condition that we agreed to return. Joe and I mused on the way to the airport that perhaps our next trip back would be to climb Kilimanjaro, as has always been my dream and is now his.

When we had arrived in Tanzania, it was dark. We hadn’t been able to see Kilimanjaro. It was not visible when we headed towards our safari either. Sunset was approaching and we told the driver we hoped we would see Kilimanjaro. He told us it is often not visible because of clouds and air quality. Someone was looking out for me, though. As we got closer, the driver told us we were in luck. Off to the left side of the van, the mountain was visible. We all craned our heads to see it. I teared up yet again. The silly mountain took my breath away. Damn, Africa. You’re killing me.

The driver stopped for us so we could take blurry and barely adequate photos in the waning light. Joe posed in front of it, an action he told me cemented his intention to return and summit it someday. It’s hard to describe how the sight of that mountain touched me. Sitting here with my laptop, I am overcome with the memory of my first glance at that peak. If I am never afforded the opportunity to follow my dream to climb it, I am forever grateful for the chance I had to see it rise above the clouds.

We arrived at the airport, filled out all the necessary forms, and made our way back onto a sizable aircraft that would fly us to Amsterdam for our return flights across the Atlantic and finally home to Denver. With full hearts, we said so long to Tanzania. Until next time….