On our last day in New England, we toyed with the idea of spending the day in Boston proper. But, after consulting with many locals about traffic, parking, mass transit, and things to do, we were too overwhelmed with information to choose what we wanted to do and see. So, I made an executive decision that the best course of action would be to do something truly appropriate for New England in the fall. We would spend the day in Salem. Why not? It’s October. What better time to visit the city of the witch trials?

We had no real plans in mind for our four hours in Salem, so we just began walking around. The entire city  was decked out for Halloween. In addition to the usual tour guides in their period-appropriate costumes, we found plenty of costumed ghouls, zombies, and assorted freaks wandering the streets. (We remarked that our boys would probably never trick-or-treat if they lived here; they would be too scared to go out.) Being from the land of level, concrete sidewalks and young trees, we appreciated the brick and cobblestone walkways covered in fallen leaves. I noted very quickly, though, that walking and texting under these conditions is ill advised.

The only thing we planned to visit was the Salem Witch Museum, so we went early to purchase our advance tickets. From there, we wa 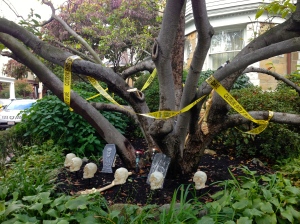 lked down to the wharf. Salem was the sixth city in the United States and was an important port from the time of the Revolutionary War and the War of 1812. We saw the Customs House and then made our way by the John Ward house, which was built in 1684. In Denver, if you have a home from the early 20th century, you have a truly old home. We couldn’t even imagine that some people in Salem live in homes that are nearly 300 years old.

Eventually we made it back to the Salem Witch Museum in time for our tour. The tour, which is actually more of a presentation than a tour, was hokey but it gives an accurate description of what was happening at the time of the witch trials. The description of the climate of fear and faith in the late 17th century in New England reminded me a bit too much of the current time. The abridged version of the Salem witch trial story is that some young girls, bored with being young girls in the restrained times, put on a little act. By the time they were finished with their inexplicable antics, nineteen innocent people had been hanged in the gallows and a final guiltless soul was pressed to death under the weight of heavy boulders. Lovely people, those Puritans.

We finished our time in historic Salem with a pizza lunch at the Flying Saucer Pizza Company. We chose the Starbuck as our pizza as our lunch….canadian bacon, pineapple, and jalapenos. Yum! (Perhaps we chose that pie simply because we’d missed our Starbucks breakfast?) Lunch was great and we made it back to our car just as the four hours on our parking meter expired. Now we’re sitting in Logan International Airport, ready to fly home to our boys. Can’t wait to see them. It’s been a whirlwind three day tour. Next time, we bring our kids and take in Boston and its history in full.