On our last full safari day, we had a singular goal. We were going to spend some time observing the migration. By this time on the trip, the thought of spending hours in the Land Cruiser was becoming less shiny and new. We adored seeing the animals, but we were growing weary of bouncing along the dusty plains. If our trip had been longer, we might have spent the day relaxing around camp instead, but we had one full day left and we weren’t going to squander it because our tushies were tired. After breakfast, we loaded up and headed out.

We had to drive for a while, away from the lakes and the hill area, back onto the plains. Eventually, on the horizon we began to make something out, a line of marching creatures. Ammy told us that the wildebeest often travel single file because otherwise they would trample all their grazing land. And, sure enough, all over the plains we witnessed narrow animal trails leading to open land filled with fresh grasses where individuals would separate and graze. We cruised closer to them, causing some of them to run as they crossed in front of us, not wanting to break with their herd or be left behind. Video here.

Wildebeest and zebra travel together. The wildebeest are great at finding water but their eyesight is poor, which leaves them vulnerable to predators. Zebras have great eyesight for spotting danger, but aren’t so adept at finding the water they need every day or two for survival. So these two creatures work together. Too bad groups of humans can’t figure out how better to work together for mutual benefit.

I am known in my family for making animal noises when I see that animal. I blame it on the Fisher-Price See ‘n Say toy I had as a child. Because of it, I moo with greater frequency than most people. I am also the annoying person who ends up mimicking someone’s accent quite unintentionally. So imagine my glee when I realized that wildebeest sound similar to cattle but with a slightly different accent. When we would park to observe the wildebeest eating and playing, I would have to make gnu sounds to see if they would gnu back. They usually would. Here’s one time when my gnuing got them going…enjoy the sounds of the wildebeest.

After a lot of driving around (chasing a migration is a lot of work), we landed back at the camp for lunch. We discussed how we wanted to spend our last afternoon on safari. Half of our party decided they wanted to relax and unwind, and who could blame them after 8 days in a Land Cruiser? Steve, the boys, and I decided, however, that we had serious fear of missing out, so Ammy graciously took the four of us out for one last game drive.

We had in mind a trip to Lake Ndutu to see the flamingos so we started to head there and first happened upon a giraffe trying to get a drink, its crazy long legs making the simple task an exercise in grace and flexibility.

Eventually we made our way to Lake Ndutu to see the flamingos we’d not been able to photograph the day before on our way in. Lake Ndutu is a saltwater lake filled with briny shrimp on which both greater and lesser flamingos dine. There were many flamingos that day, but most were not close enough to photograph. Even when you can capture them, they are not the most helpful of subjects, their heads dipping under the water to feed. 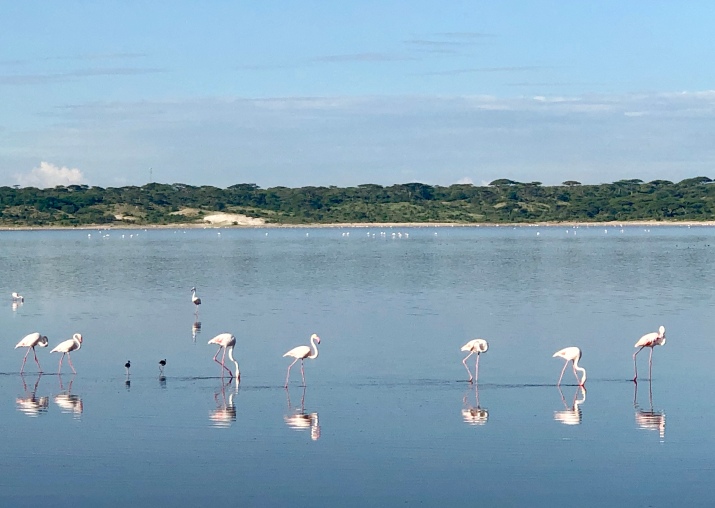 As we were wrapping up our drive and heading back to our camp, Ammy drove us closer to the shore of Lake Masek where we were staying. Some wildebeest had been attempting to cross the lake the previous day. Most made it. Some were not successful, and their carcasses washed up near the shore opposite where they began their crossing. Along the shoreline, it was The Lion King all over again as we got to witness the end of the circle of life. Scavengers were doing their job, dining on the wildebeests who hadn’t survived their crossing. There were vultures and hyenas and those crazy marabou storks I mentioned in my last post. Did you know there are carrion storks? I didn’t. As my sister-in-law pointed out, that kind of puts a different spin on the whole idea of having a stork deliver a baby. It seems that could end badly. Still, the storks provide a necessary service. In the US, we might see an area where animals are repeatedly dying and think, “Whoa! We need to fix this.” In Tanzania, they choose to allow nature to do what nature does naturally. It makes sense. I think about the massive overpopulation of deer in some of our northern states, an overpopulation that now results in an appalling number of deer versus automobile accidents. Deer overpopulation occurs when you eliminate their natural predators, natural predators humans eradicated because they also occasionally gnawed on livestock. We interrupted the natural order to solve one problem and inadvertently caused another. Mess with Mother Nature and inevitably she will mess with you.

Ahead of us on the road where we were watching the vultures, storks, and hyenas at the all-you-can-eat wildebeest buffet, one hyena laid down to rest in the afternoon shade. Something about the way she was positioned, head on her paws, eyes barely able to remain open, reminded me of our dog. I decided that people who don’t like hyenas are people who don’t get hyenas. They’re actually quite likable once you get to know them.

We called it a wrap on our day and returned to camp disappointed that our safari was over but grateful for the opportunities we’d had. We got cleaned up and headed to the dining area for drinks and one last dinner with Ammy. We would miss him too. I wasn’t looking forward to saying goodbye to any of Tanzania, landscape, animals, or people.

That night, as I curled up one last time under the mosquito netting we had grown accustomed to, we were once again serenaded by the hyenas. I had to wonder if one of them was the little lady we saw waiting on the road. In the morning we would pack up and head back to Arusha and then finally return to Kilimanjaro International Airport for our flight home. I didn’t want to leave, but the thought of perhaps at last catching a glimpse of Kilimanjaro gave me something positive on which to focus as I drifted off.