“I crashed down on the crossbar, and the pain was enough to make a shy, bald Buddhist reflect and plan a mass murder.”  ~The Smiths

A little over a month ago, my youngest sister called to let me know life had dealt her an epic smackdown. She was reeling. I was reeling along with her. And so I packed a bag just barely under the 50-pound limit, said goodbye to my husband and teenage sons, boarded a flight to Hartford, and settled into her home for an extended 5-week stay, presumably to offer comfort and make her life a smidgen easier.

A little over a week into my stay, however, the Universe decided one epic smackdown was not enough. On an unusually rainy day in the midst of an unusually rainy week, I grabbed Julie’s jumbo umbrella and headed out to collect a package UPS had left in the wet driveway. I walked out the back door and was descending the wooden steps from the back patio when my flip-flops betrayed me. With unbelievable flourish and zero panache, I caught serious air in a feels-like-slow-motion wipeout that would have won the day on America’s Funniest Home Videos if I had been unfortunate enough to be caught on camera. I landed butt-side down on the unforgiving edge of a step, one arm wrenching backwards and loosening the umbrella from my grasp, the other slamming onto the step beside me. From there, I proceeded to slide down three more stairs on my already tender tush because, well, I’m just that good.

I gave birth to two sons through induced labor. I suffered through seven years with gallstone pain before finally acquiescing to surgery. I had an emergency appendectomy. I am familiar with pain. When I at last came to a halt on those wicked stairs, the pain was exquisite enough to take my breath away. I began to sob a pathetic whimpering cry reminiscent of The Man in Black after Count Rugen ratchets his torture device up in The Princess Bride. I sat for a couple minutes while my tears disappeared in the soaking rain and tried to determine if I dared to move. I wasn’t sure if I had broken anything. I was afraid if I shifted in any way I would feel worse.

A couple hours afterward, already sporting impressive swelling and dark bruising, I found myself lightheaded, nauseous, and experiencing cold sweats. I had my sister drive me to Urgent Care. After examining me, the PA told me I had only a severe bruise and significant hematoma. The fainting spells were likely vasovagal syncope responses to the trauma. The numbness I felt in my hands was due to swelling and the whiplash I sustained in the fall. All of this was good news. I simply had a severe minor injury, which was still nothing more than a minor injury. Sure, I blacked out again during the car ride home, sending my sister into a near panic, and later I had to crawl up the stairs to bed after another fainting episode, but it could have been much worse. I lucked out.

I’ve had a plethora of time resting my backside on ice and heat since then to reflect on my mishap. I keep coming back to the first Buddhist Noble Truth. In each life, sickness, loss, and death occur. They are inevitable. The Universe, God, the Flying Spaghetti Monster, insert your higher power here, doesn’t play favorites. The human condition is the great equalizer. No matter who you are, no matter what type of life you lead, you will suffer. I arrived in Connecticut on my high horse, prepared to sweep in, full of sunshine and light, to help my sister deal with the unwelcome unexpected. I ended up on my sorry ass at Urgent Care with my own unwelcome unexpected.

It’s not what happens to us but how we handle what happens to us that matters. I can’t avoid suffering, but I can reframe it and refuse to let it define me. Two weeks have passed since my digger on the stairs. I am still bruised. I have what appears to be a permanent dent in my hindquarters. It doesn’t matter. It’s part of my experience. It’s not what I envisioned, but any time I spend railing against what is wastes my time here.

Epic smackdowns are growth opportunities. They are an elbowing nudge from the Universe imploring us to open our eyes. I’m awake now. 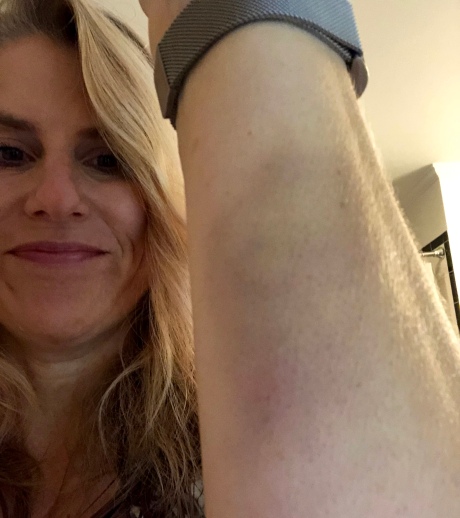 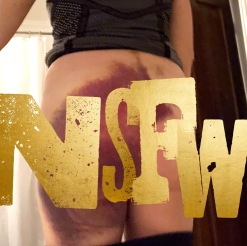 In case you thought I was exaggerating 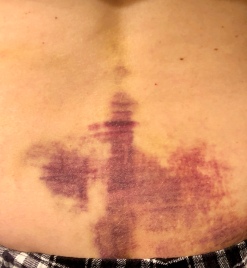